You the reader will be scanning this documentary exactly 26 years to the day. It was the 6th of December 1970 when New York City was dressing up for Christmas. The giant Christmas tree in Rockerfeller Plaza was lit. Hoardes of shoppers were in the streets, Christmas cheer and holiday spirit in the air. A young Sri Lankan bachelor was returning from a crucial meeting in Parkway Village, Queens, home of Raju and Vijay Coomaraswamy. They had hosted the pioneering group of Ceylonese (the country was then called Ceylon) spearheaded by this young patriotic, homesick bachelor Ranjith Swans whose brainchild was to create an association to preserve the culture and traditions of the beloved country he left behind, Ceylon. ... 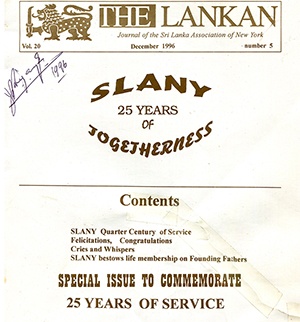 Receive information on community events and other local activities